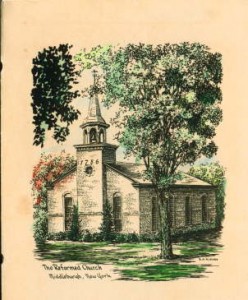 In 1712 the German Palatines established a settlement, Weiser’s Dorf, which would become Middleburgh. Soon after they were joined by the Dutch who prized the fertile farmland of the Schoharie Valley. They brought with them their religious practices and devotion to God, and by 1730 had built the first Dutch Reformed Church on Upper Main Street, the location of that original settlement.

In 1780, during the Revolution, a raid on the valley by the British troops left burned farm buildings, crops and a leveled Dutch church. After that tragic event, church fathers determined the replacement edifice would be located on Lower River Street. The reasoning was that a newer settlement had developed there, partly because there was a ford across the Schoharie, which allowed rapid access for those across the creek to reach the safety of Middle Fort. However time would question that decision for the Schoharie Creek flooded periodically placing the church in jeopardy.

In recent times, the flood of 1955 required major repairs to the sanctuary. Following that flood and for many years after, the church used the purchased adjourning former Scribner property for fellowship, Sunday School, meetings and services. The church flourished during that period of time but then came the flood of 1996, which once again did much damage to the church and to the foundation of the Scribner house. At that point it became evident that the time had finally come for a major project which would protect the church from flooding and also provide a safe and commodious place for the Sunday School, church and community events. Hence the Fellowship Hall was built and dedicated in 1999.

Recent beloved ministers of the faith have included Reverends Douglas Walrath, Gordon Alexander, Paul Ferenczy, and Mary Wisner. In 2009, we welcomed Jeffrey Kelley. There is an active Sunday School and adult education program. The benevolence program seeks to minister to the community and the world at large. The church has in its archives many original papers from the early years, including the Zeilie Low Dutch Bible. The historical papers are but a symbol of the inheritance we have received from the dedicated Christians who have served through low and high times. To God be the Glory.